Yesterday I had the great pleasure of presenting our Skunkworks activity at the launch event for Barnsley's TechTown Action Plan - A Digital Campus down at the DMC. 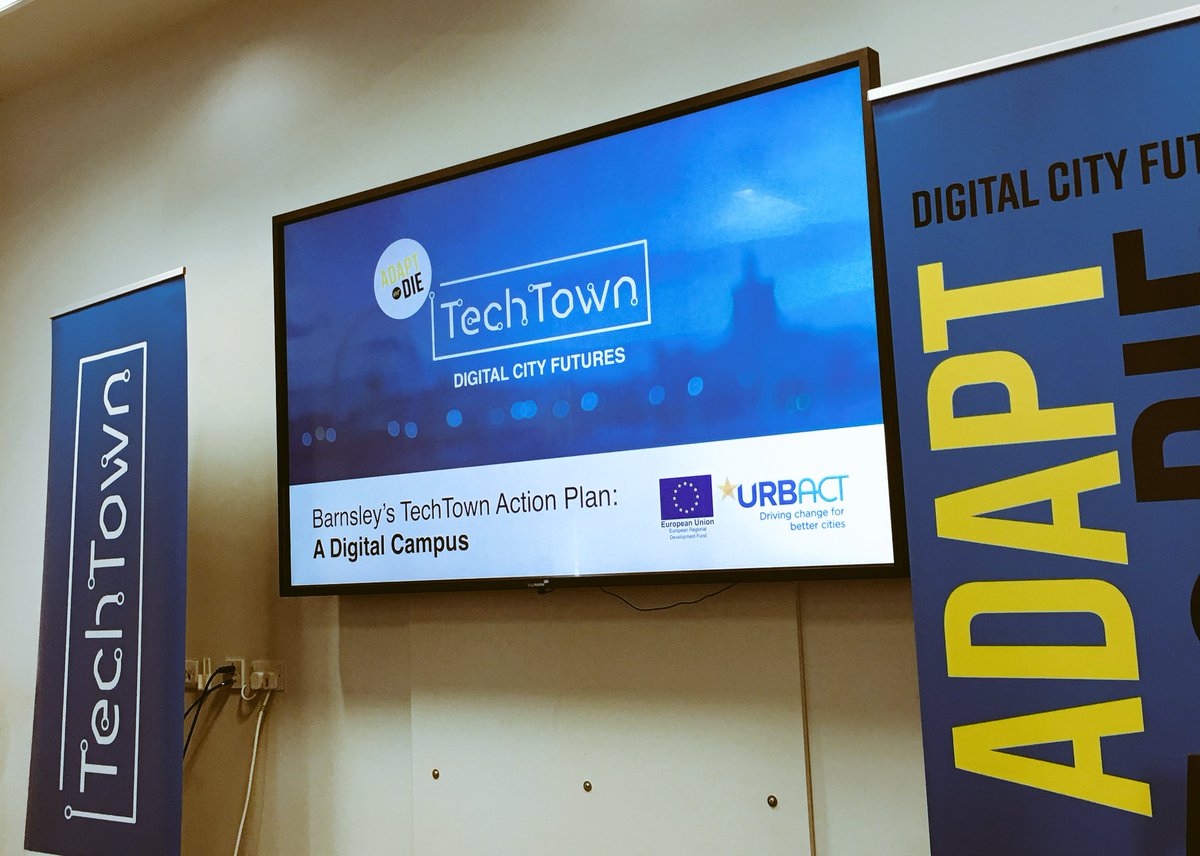 Slide of "Barnsley's TechTown Action Plan - A Digital Campus" TechTown is an action planning network funded through URBACT - an EU funded programme that brings cities together across Europe to tackle common challenges. There are 21 of them active right now, and in our case the challenge was around how medium sized towns and cities can support more and better jobs with a particular focus on digital - not an easy thing to tackle.

Our action plan (which I'll link here eventually) in response to that is a culmination of 12 months activity working with local businesses, the public and the education sector. It's not a fait accompli (I had to look that one up), but rather it discusses how we can create an environment, both physical and logical, in which we can all [continue to] work together in an agile way, learning, iterating and collaborating to foster the change Barnsley needs.

Taking part in the whole TechTown process has put Barnsley on the map too - we're the lead partner in a network of 11 cities including Limerick in Ireland, Basingstoke here in Blighty, San Sebastián in Spain, Clermont Ferrand in France, Siracusa in Italy, Dubrovnik in Croatia, Nyíregyháza in Hungary, Cesis in Latvia, Gävle in Sweden and finally Loop City in Denmark which is a group of localities just outside Copenhagen. Sadly I've had no site visits to any of these places yet ;-)

The work that Tracey Johnson and Ceri Batchelder have done to get this off the ground and to the position it's in right now it's nothing short of amazing and shouldn't be underestimated in terms of the benefits it will bring for the future of Barnsley.

There's so much more information about Urbact, TechTown, the Action Plan and Digital Campus online but I wanted to quickly touch on why I was there showcasing our Skunkworks and how it contributes to the overall picture. And it's about skills - new digital skills that we wouldn't ordinarily get a chance to learn or use in the typical council environment.

I presented the Skunkworks yesterday as an opportunity for us to bring staff together from all across the council to collaborate on innovative technology projects that can make a real difference in Barnsley. To break away from the bureacracy of the day job for a period of time to try something new, to learn something new, to do something new. Innovation doesn't happen if we all keep doing the same thing.

Eventually that will extend to working with partners, local business, Barnsley College, the University Campus and more. It's early days for our Skunkworks with a lot of the finer detail about how it operates left to work out, but it is up and running and is delivering some exciting pieces already. It's made up of a core group right now that will expand as we begin to demonstrate the things we're working on. I also hope to have it run (or at least join in with) regular Hack the City style events in the not too distant future.

I had a lot of great conversations after the event with people interested in getting involved and I'll spend some time over the coming weeks fostering those relationships. It's an exiting time.